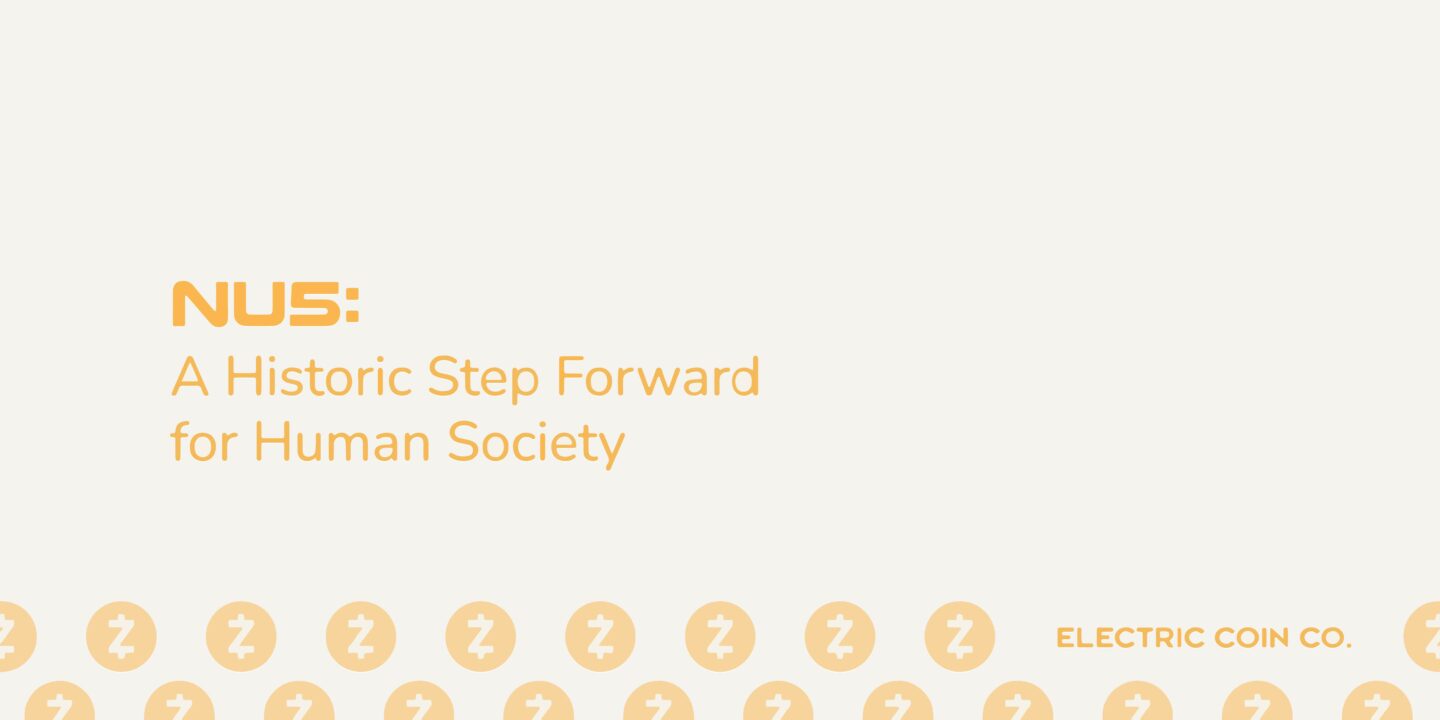 Zcash’s Network Upgrade 5 was announced a few days ago. It includes a number of technical improvements to the protocol and is a massive step forward for our society and pursuit of economic freedom.

The upgrades are technical in nature, but they have major implications for everyday users and their financial transactions. So, what does NU5 mean for all of us?

To truly appreciate its significance, we first need to understand our dependence on financial intermediaries.

The tech behind modern banking and financial services has made things infinitely more user-friendly. But as these services are made easier, corporations, governments, and other intermediaries gain access to our data. They often leverage this to surveil, censor, and at times, prohibit our means to transact.

We have to trust that these financial systems won’t shut down. We expect that banks and apps are always going to work. We rely on their infrastructure and, at times, doubt that potential single points of failure will ever be exploited.

We also hope that the controllers of these systems will never censor or block our ability to use, or access, our money.

Cryptocurrencies provide monetary systems that allow us to transact and store value without permission from centralized intermediaries. These systems of money are distributed, cannot be turned off by any single party, and to be completely censorship resistant, they don’t rely on any one person or group. In most situations, we shouldn’t view trust as a negative thing. However, trustlessness is vital for people to have maximum economic freedom.

Bitcoin is often seen as the pinnacle of decentralization, trustlessness, and censorship-resistant money. However, there have been instances where Bitcoin has fallen short of this goal, due to one major flaw.

When addresses are blacklisted, the owner (and likely any address associated with the address in the public ledger) cannot access services that make Bitcoin usable for most people. Think CashApp, exchanges, and Bitcoin ATMs.

In extreme cases, bad actors can even track down Bitcoin users, arrest them, and force them to give up their private keys. Users have physically seen their Bitcoin stolen by criminal groups, or frozen and seized by governments.

This failure has sparked many conversations around cryptocurrencies being incapable of being politically neutral money.

When situations like this occur, many say that the victims should have used Zcash. And while that is a valid suggestion, Zcash has had its skeptics due to its origin involving a complex setup ceremony.

When Zcash implemented the first use case of zk-SNARKs, the cryptography that enables truly private crypto transactions, it required a parameter generation process to launch the currency. People have called this a “trusted setup” because users of the protocol would have to trust at least one of the six participants to act in good faith.

The ceremony was very well documented, and for almost everyone in the industry, there’s no legitimate reason to distrust it. If even one of the six participants in that ceremony was honest, the money supply would remain sound. A major upgrade of Zcash in 2018 required a new, even more secure ceremony involving hundreds of participants.

Further technical explainer: For any future counterfeiting of ZEC to occur, every ceremony participant would have to be a bad actor, and even in that case, the protocol’s privacy would remain uncompromised. We know no counterfeiting has ever taken place because we would be able to identify this in the liquidity pool.

But the reliance on a certain amount of “trust” has, in some people’s minds, prevented Zcash from reaching its goal as a truly decentralized, politically neutral money. This issue isn’t specific to Zcash. Every implementation of zk-SNARKs has required a setup ceremony.

This means when someone uses applications that support Orchard, they don’t have to put their reliance, or trust, in any one person or group. They can be confident that the system is completely censorship-resistant, will always allow them to transact, and the currency’s supply will never be altered.

Zcash’s privacy has made it the best way to avoid financial censorship, and now the Orchard pool enables a unique system where users don’t have to choose between reliance on a group of people and privacy.

The future of peer-to-peer money

As mentioned in a previous blog, “the efficiencies built into this upgrade make possible — for the first time ever — private, trustless digital cash payments on mobile phones.”

This creates a digital peer-to-peer money that gives users ultimate confidence and sovereignty over their money. This level of ownership moves humanity closer to economic freedom and equality.

While we can get lost in the technical side of NU5, we mustn’t discount the impact it has on the future of our financial world. Its impact will be solidified as teams develop applications that deliver ZEC user experiences that rival modern, digital banking.

The future state of Zcash has yet to be fulfilled, but the NU5 announcement lays the foundation on which the future of money will be built. A future of money that is digital, private and not reliant on any person or group.