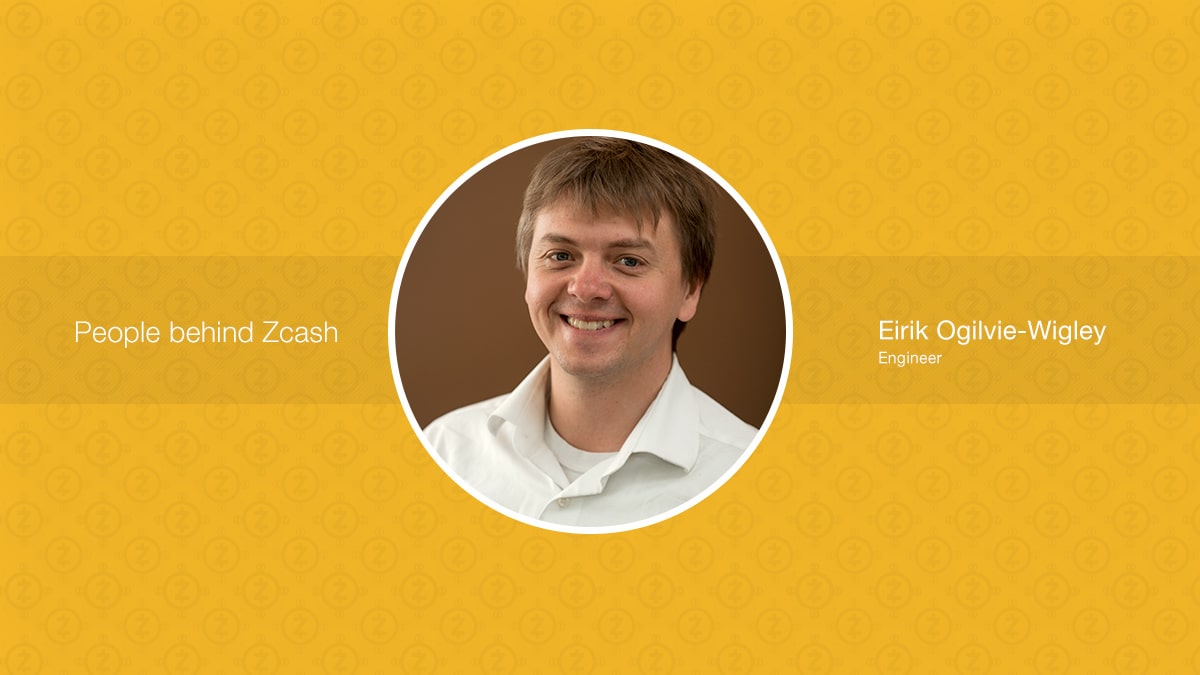 If you ask Eirik Ogilvie-Wigley how he came to join the Electric Coin Company, he says, “My story is really one of luck.”

Years ago Eirik got to know Zooko while playing Magic the Gathering; every few months their paths would cross. Back then, Eirik was working as a programmer for a tax software company but was really more interested in optimization problems and decided to quit his job. Right around that same time, as fate would have it, Eirik ran into Zooko at a coffee shop and they began talking. Zooko invited Eirik to apply to what was then a relatively new company and bring his proficiency in pure mathematics to the team. Eirik’s academic experience at CU-Boulder was extensive.

“It got to a point where they wouldn’t let me do any more math classes,” he says.

Eirik realized he needed to branch out. He considered double majoring in physics or minoring in philosophy. However, since computer programming had always been a hobby of his, he settled on a minor in computer science, setting the stage for his current career.

Eirik was hired at Electric Coin Company in a role that he characterizes in these terms: “I like to think I’m a generalist. I work on lots of different stuff.”

Eirik’s range of knowledge offers the team the opportunity to utilize his talents with Rust code in the Zcash cryptographic libraries, ecosystem work, writing scripts for gathering data, and what Eirik describes as ‘the giant universe’ of C++ code base.”

“You really have to be a generalist [to work with] some other people who are very much the opposite; it’s such an eclectic group,” he says. “Many people at the company are highly-specialized. I help fill in the gaps and, you know, carry the coattails and that sort of thing.”

After having been an engineer at Electric Coin Company for almost a year, Eirik says that what gets him out of the bed every morning is the fact that “there’s no end to how much interesting stuff there is to research. There’s always something new to consider.”

Eirik’s commits to zcashd are bubbling up among the overall contributors. He feels proud of this “because the project is so complicated and so massive … There is a lot of slogging through many lines of code but eventually it all comes together.”

Regarding privacy, Eirik says it’s a complicated challenge societies will always have to deal with. He shares a recent example of privacy invasion enculturated into the fabric of everyday life that he found particularly unsettling.

“My sister was trying to join my mom’s bank account, and they had to share all of this personal information,” he says. “I remember this guy at the bank saying, ‘Watch this video about how we use your private data and how our business partners are about to use your private data.’ ”

The process required new account holders to consent to having their private data collected and shared. This prompted Eirik to ask some important questions: “Should people be allowed to have wealth? Of course, that’s something that everybody expects to be able to have. But at what cost?”

Eirik’s work at Zcash is not only integral to the overall success of the project but also personally fulfilling, “What makes me happy when I go to sleep is that all these little details, all this fun that I’ve had [throughout the work day], is also doing this amazing thing.”