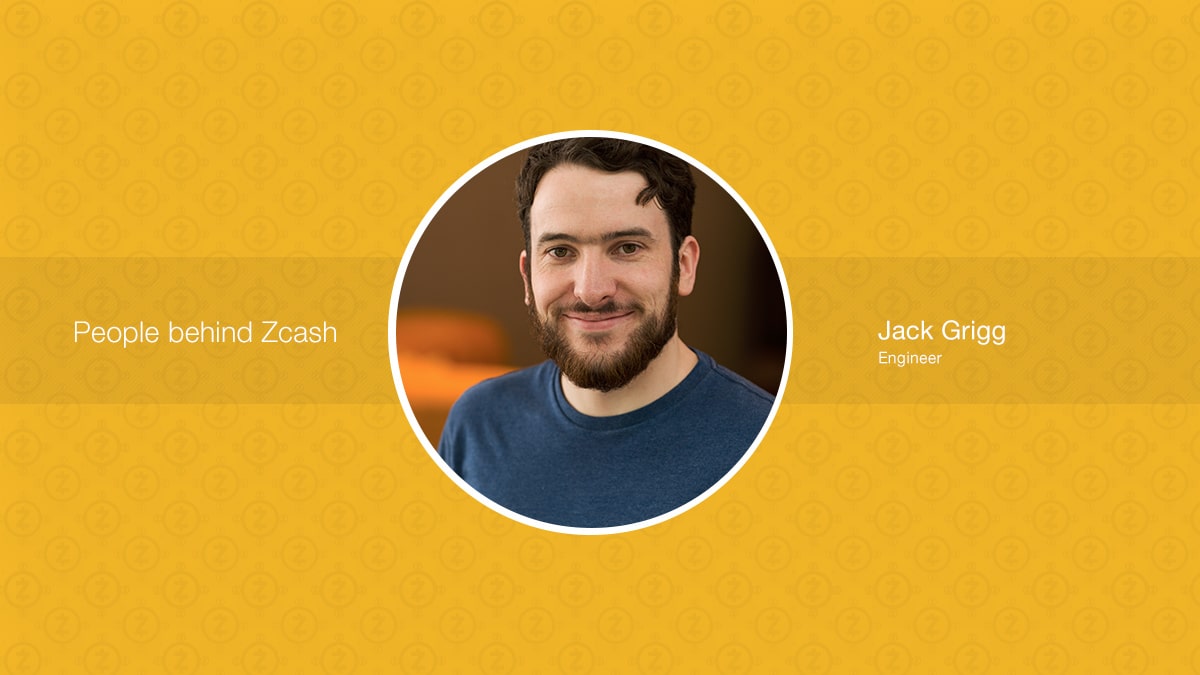 “I’m proud of how we have led the way into this brave new world where it is actually possible to create fully privacy-preserving interactions on the internet in an efficient way. I’m proud that the work we do around that is entirely open source. We are creating this and creating it for the common good.”

It’s not every day you meet a cryptographer with a Ph.D. in applied physics and a deep knowledge of high-bulk wool batting.

Having initially been involved with product development in an academic setting, Jack Grigg came to what would be a life-changing realization: “I don’t like pure academia. I like writing code. I like designing things and building things.”

This passion for design and building would propel Jack away from academia and toward a new area of interest, “I got into I2P, I liked the privacy aspect and the anonymity aspect, and what I really wanted to do was make this stuff usable. So I fixed some UI problems and accidentally became a core developer,” he says jokingly. “And through that, I became interested in cryptography, particularly the real-world interactions with it, while procrastinating my Ph.D. thesis.”

Back in those days, Jack remained pseudonymous, but it proved challenging. He describes one scenario from Real World Crypto 2014 where he was wearing a hoodie pulled up over his beanie-covered head while donning sunglasses indoors. He remembers “listening to all of these amazing academics and industry people giving these presentations. And I then spent half an hour discussing the finer points of Tahoe-LAFS with Zooko and Brian Warner.”

Jack was known only as str4d back then. As he explains, “In about 2011, there were various privacy and activism things going on that came across my news feed, and they piqued my interest. I poked around a bit, discovered Tor and I2P, and started hanging out on I2P’s internal IRC network.” This naturally led him to seek out a more private identity to use within this privacy-aware community. “I remember spending a day Googling, through Tor, a bunch of different handles … and eventually came up with str4d. str4d is short for Stradivarius, the violin maker. That’s why on most of my profiles my avatar is a little violin. It’s the sort of thing that if I was trying to be properly pseudonymous I wouldn’t tell anyone. But I’m too social for my own good!”

Jack made his way to the Electric Coin Company team right as he was finishing up his Ph.D. “I got chatting with Zooko on Twitter about something to do with running Tahoe-LAFS on Android. Then fast forward four or five months and I’m working on Zcash at the company.”

What first drew him to Zcash was that “prior to the Zcash network, zero-knowledge proofs were primarily an academic discipline. This was really the only place to go to work on strong distributed application-layer privacy to the level of privacy that I would want it. I liked that the Zcash network was being designed for what I like to think of as privacy maximalism.”

“I liked that perspective shift. Having come from the network-privacy ecosystem with overlay networks like I2P and Tor, one of the biggest problems they face is in creating privacy at the application layer. If you want to have a proper privacy-respecting system, you have to be designing it with privacy in mind at all levels.”

“I’m really glad that I’m now in a position where I can work with people who are so skilled in their areas that we can build together and act as a force multiplier to make this stuff work, and work well.”

A Sense of Pride

After being part of the Electric Coin Company team for the past three years and making significant contributions to the Zcash protocol, there is a lot to be personally proud of, and yet he redirects to the progress of the entire team. “I’m proud of how we have led the way into this brave new world where it is actually possible to create fully privacy-preserving interactions on the internet in an efficient way. I’m proud that the work we do around that is entirely open source. We are creating this and creating it for the common good.”

“There are plenty of companies, I know of several, building on top of what we’ve done — and sure, they might become more commercially successful — but what I value and am proud of is our ethos. We do this because we care. And I think it’s because we care that we can do such a good job, because our incentives are aligned with usability rather than to make money or satisfy shareholders or appease advertisers. We are building a project that we can be proud of — one that provides the best privacy within a context that users are actually going to use.”

Jack’s collaborative spirit is evident as he describes how he sees his current role in the larger open source ecosystem. “I’ve obviously upskilled significantly on cryptographic engineering and protocol design, as in I feel I can reasonably contribute to them now. One of the things it’s helped me to do is take these skills back to other open source projects, like I2P, to help with their protocol design.”

Zcash is fortunate to have this self-described “UX enthusiast” on-deck, and he encourages more people to contribute to the Zcash protocol. “We definitely need more people who care about this. If you go in with the mindset of ‘doing this because it matters’ then you are going to be more invested in the protocols you design and the things you do, and you’ll end up with an overall better result.”