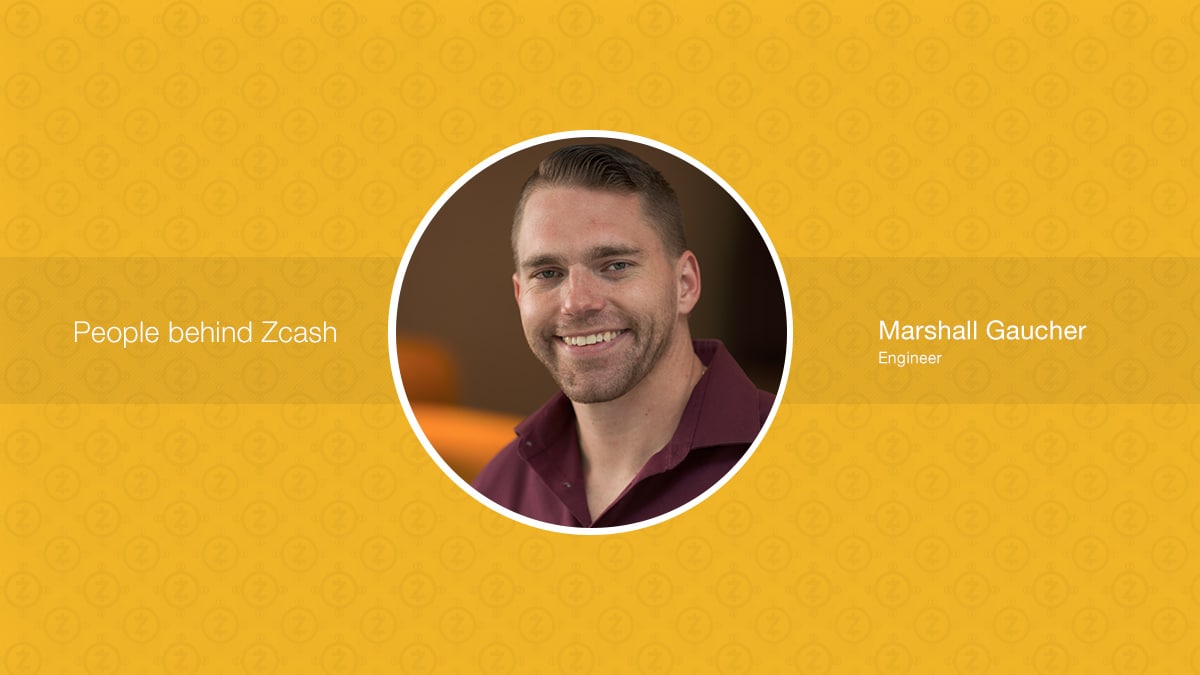 There are many inspiring and talented people on the Zcash Company engineering team, and Marshall Gaucher is no exception. With responsibility across multiple teams — including dev infrastructure, zcashd, wallet and security — Marshall’s ability to effectively communicate and collaborate is critical to the success of the project.

While a broad role like this might leave some people feeling frazzled, he leads with a calm presence — and a great sense of humor. In describing the dev infrastructure team’s work he said, “We’re basically pro bono network doctors … Our system may or may not come to its appointment, but we still provide real-time treatment, with no insurance policy.”

Marshall found his way to Zcash Company last year during a search for meaningful work. “I wanted something that would give me a challenge, while genuinely contributing to society, not just pumping out another product that lasts 5 to 10 years that no one really remembers,” he said. “Being a part of technology that leaves a legacy is much more fulfilling than riding along on the product popularity bus.”

The work at Zcash Company did not disappoint, he recounts: “I jumped into it, and felt like I was back in school again. It was really cool. There’s so much research and so many beautiful minds and the great thing about it is everyone was genuinely just trying to solve problems. And sometimes the problems being solved didn’t make products, it just created more opportunities to learn and contribute to society. That’s intrinsically motivating.”

The work is not only personally inspiring but also academically rigorous, which suits Marshall just fine. “I’ve always wanted to learn a bunch of applied cryptography,” he said, “and until you actually have either security experience or you’re a mathematician or are at least established in the industry, there’s no way you’re going to even get your foot in the door for that job. This [job has] everything. I’m still learning every day.”

Marshall said he is inspired by a combination of the work and the people at Zcash Company. “Some people get caught up in the day-to-day and lose scope of what matters in life, and I feel that I actually … care about what I do. I’m not just punching a clock to get a paycheck or bonus. I think about what societal impacts this has long-term. I’ve been around a lot of engineers all around the world, and I don’t know if everyone really thinks that way. For me, personally, I take a lot of pride in what I do. Otherwise, I don’t really feel like I should be doing it.”

The mission of Zcash Company is to empower everyone with economic freedom, and for Marshall, those are more than just words. “I love this company because these people are passionate … they want to move the world … I don’t think any of us really care that we work the weirdest hours all the time. We just love what we do, and so being a part of that and aligned with those people is uplifting. I can’t say that I’m unique or anything, because everyone else is like that here.”

Zcash Company is fortunate to have Marshall on the engineering team to advance Zcash’s privacy-protecting technology, which he believes is of critical importance. “Privacy [technology] is something I want to contribute to, [because without it] you’re not truly living free.”