Bittrex surprised the crypto market Jan. 1 with the news that it would delist Zcash, Monero and Dash on Friday, Jan. 15 (Twitter, blog). They gave no reason for the action. And, unlike their previous social media posts, the company disabled comments. We made multiple attempts to reach out to Bittrex, but to date, they have been unresponsive. We hope to hear back from them soon, but for now it appears that they don’t want to talk, or someone is preventing them from doing so. 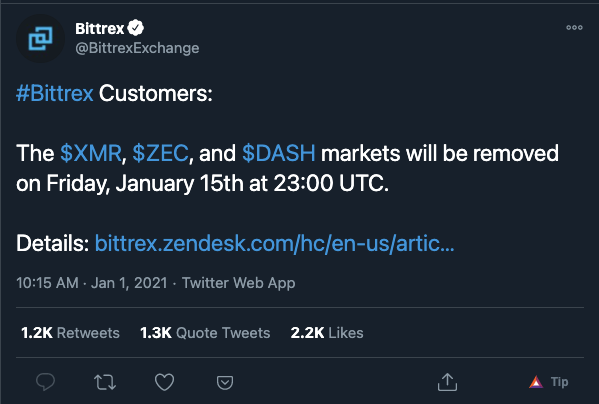 In spite of all the conjecture on Twitter, there is no public regulatory rationale for delisting Zcash. Law firm Perkins Coie recently published a paper that lays out how regulated entities can comply with regulatory requirements and support cryptocurrencies that include privacy as a feature.

In fact, many exchanges in the US are doubling down.

Gemini recently spent months on readiness and in September formally announced support for Zcash shielded withdrawals for the first time on a regulated exchange. Following the Bittrex announcement, Gemini CEO Tyler Winklevoss reiterated his support for Zcash on Twitter. 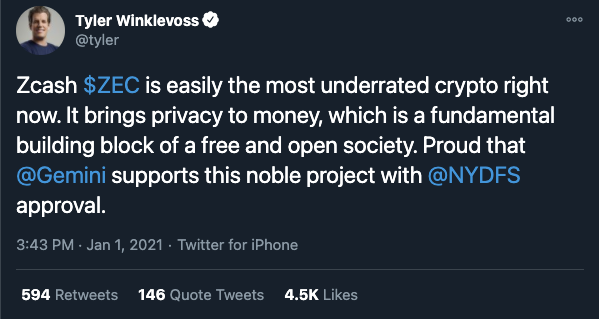 If there is a regulatory issue, it seems to be constrained to specific exchanges. In November, ShapeShift announced it had delisted Zcash, Monero and Dash in order to “de-risk,” though it appears Dash is back on its platform. It is not clear what this means exactly, though there may be something happening behind the scenes that is restricting affected exchanges’ ability to come forward publicly, as hinted by ShapeShift CEO Erik Voorhees on Twitter in response to the Bittrex news.

What is clear is that whatever is restricting Bittrex and ShapeShift appears to be limited to those particular exchanges. When asked on Twitter if Kraken was experiencing any pressure, Kraken CEO Jesse Powell stated they were not.

Jesse also speculated the issue may be specific to Bittrex, whose application for a virtual currency and money transmitter license was rejected by NYDFS for reasons that included “deficiencies in Bittrex’s BSA/AML/OFAC compliance program.” Note that NYDFS approved the listing of Zcash on Gemini, Coinbase and others.

We also know the fallout from Bittrex is affecting Bittrex partner ABRA, forcing them to follow suit per a statement from ABRA CEO Bill Barhydt on Twitter.

If there is someone or something in the US pressuring crypto businesses into submission and forcing delistings, the US public should know.

Delistings such as these are censorship. They are a challenge to our rights as humans and as US citizens. Privacy is normal, safe and essential, and we believe it will eventually become broadly accepted, or even mandated, in the same way that https is necessary for encrypting data over the internet.

We ask that members of the public with knowledge of possible overreach by government agencies or banks make this information public in order to protect our collective freedoms against censorship and unwarranted surveillance.