If all Zcash transactions used shielded addresses (which we hope will someday become the norm), then the complexities introduced with the two types of addresses disappear and privacy would strengthen for everyone in the ecosystem. Until then, understanding privacy implications such as transaction linking will be helpful for users interested in maintaining maximum control over the visibility of their transaction details.

This post will outline some privacy considerations while using Zcash with its current support for both transparent and shielded addresses and some solutions users can employ in such situations.

Where does Zcash introduce linkability?

Knowing that transparent addresses publicly disclose transaction details on the Zcash blockchain, we can assume a degree of linkability between a string of transactions using this type of address, similar to the linkability seen in bitcoin transactions. 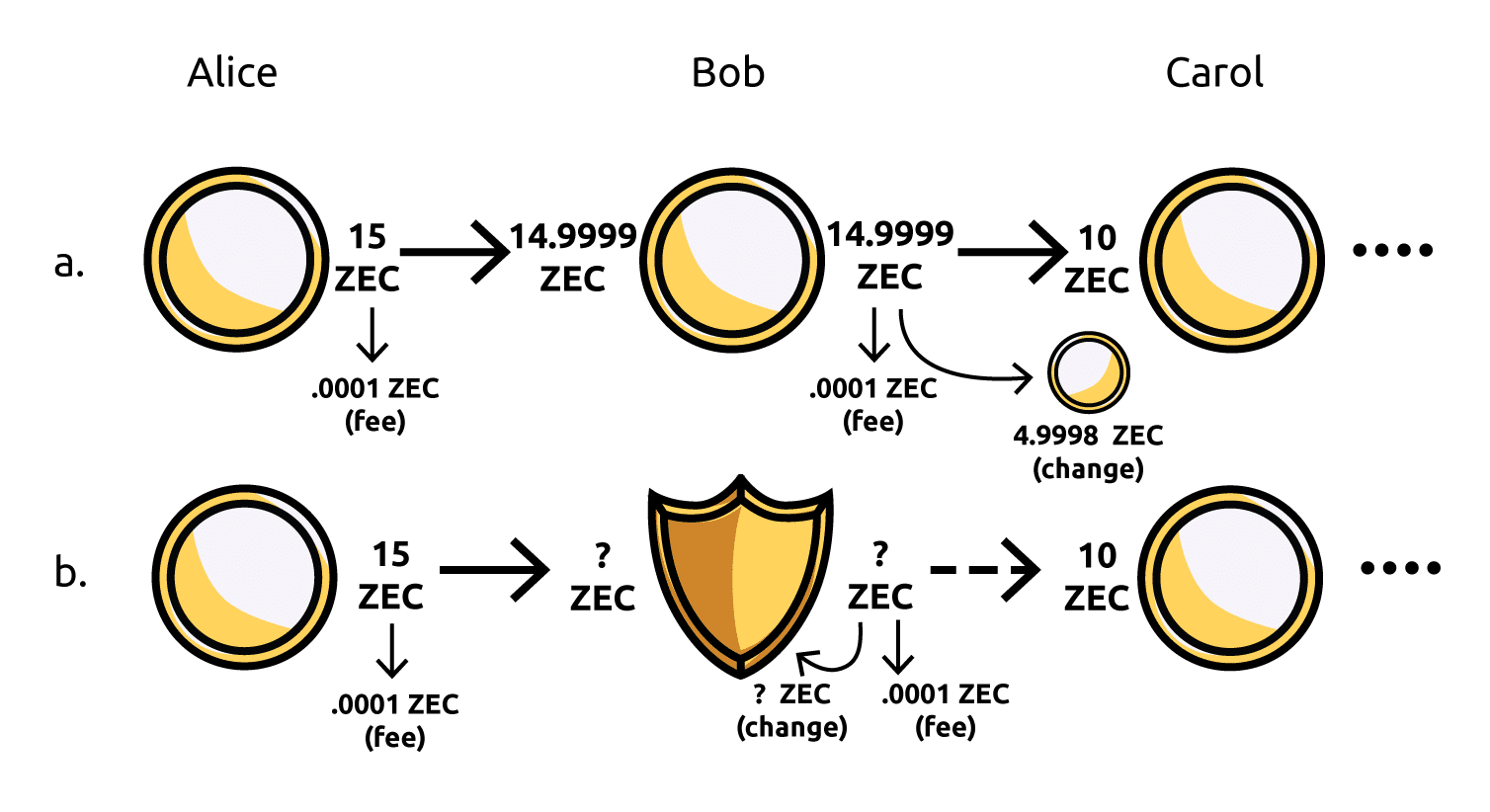 The mere use of shielded addresses by merchants accepting ZEC payments and by your friends provides an increased level of privacy for you, too! In the above example, the transaction series where Bob uses a shielded address (b) breaks the link between Alice and Carol. To help understand these properties, we created the following transactions which mimic the examples above: Alice sends 15 ZEC (minus fee) to transparent Bob and transparent Bob sends 10 ZEC to Carol compared with Alice sends 15 ZEC (minus fee) to shielded Bob and shielded Bob sends 10 ZEC to Carol.

The above method where Bob de-links Alice and Carol simply by using a shielded address isn’t 100% reliable for every situation, however.

Now, let’s consider the condition where Bob sends the full balance received from Alice to Carol and therefore has no change output. If Alice’s public output X and Carol’s public input Y are equal (or X equals Y minus two standard transaction fees) and that value is unique enough to other public values stored in the Zcash blockchain, there is a degree of association between Alice and Carol. You can see this example in the following transactions: Alice sends 15 ZEC (minus .0001 ZEC fee) to shielded Bob and shielded Bob sends 14.9999 ZEC (minus .0001 ZEC fee) to Carol.

To mitigate this, Bob should be aware when deshielding a value equal to one recently received from a transparent address. Zcash wallets might even consider implementing a feature to allow automatic detection of potential of linking past and future transactions when deshielding ZEC. [2]

Another linking possibility regards the use of transaction fees. Most wallets use a standard fee to pay miners (.0001 ZEC). In a previous post covering basic Zcash transaction anatomy, we showed how fee outputs are always transparent even with shielded addresses. While this doesn’t reveal much to the public if a standard fee value is used, addresses which consistently pay unique fees could be linked.

The solution here is to simply use standard transaction fees!

While the advantages of supplying both transparent and shielded addresses to users allows for more options [3], there is no doubt that sending ZEC between them introduces complexities which affect individual’s financial privacy. The most concrete solution to avoiding transaction linkability is simply using and requesting others use shielded addresses, which in turn strengthens the community’s overall privacy. The Zcash core development team has priorities to support growth in shielded address use and call on third party services to consider ways which make shielded addresses easier to use as well. We’re just at the beginning of this exciting new ecosystem and are looking forward to seeing privacy for all strengthen over time.